Menu
Log in
Register
Install the app
You are using an out of date browser. It may not display this or other websites correctly.
You should upgrade or use an alternative browser.

No permission to download
Overview Reviews (6) History Discussion
Hydra is up to their old tricks and they aren't alone. The world is in danger again, and there's only one force equipped to to stop them. Avengers Assemble! Take control of your favorite Marvel character - with a massive cast you're sure to find them here. Master lengthy combos, powerful special techniques, and show them why you're called Earth's Mightiest Heroes!

Yet, even with all the fantastic force at your disposal, this won't be an easy fight. Enemies are ready with tricks and abilities of their own, and will use every sneaky tactic in the book to bring you down. When the going gets really tough, call in some assistance, or unleash all your might with the awesome Avenger Power! 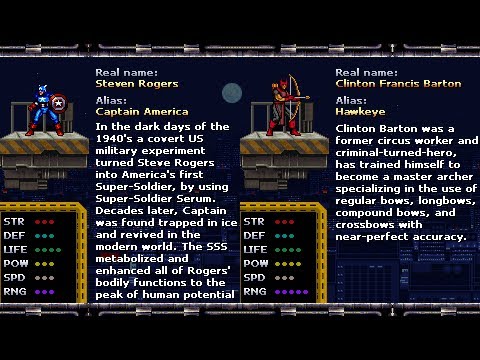 This game is a blast! Didnt think id stumble across let alone enjoy it when i did! The creators did a great job and put alot of thought into it.
Upvote 0 Downvote
Perfect item, this game is very fun and I love it
Upvote 0 Downvote
I'm not a big fan of super heroes lore, but their video games and action are always welcome to me :) .

I haven't played the Data East arcade version of this game, but is really easy to see the hard work given to this game is a really ambicius proyect with a lot of replaybility and content which gives you many games hours (I have completed story mode twice with different routes and played some mini games).

I'll be waiting the new game version :D .
Upvote 0 Downvote
This is the very game, that got me into making my own BOR projects, I love it any Marvel Fan will love it!
Upvote 2 Downvote
I think any fan of Marvel, side scrollers, or the Data East game this is roughly based on will find something to love here. The attention to detail is astounding, and it’s obvious the creator is a huge fan of the source material. I also love little touches like the petty graffiti and boss profiles.

One thing a new player should be aware of, game mechanics are based on comic world balance (to a degree) rather than game balance. There’s no “strong but slow” or “quick but weak” trope in play here. As a result, some characters are simply better than others by design. It takes some getting used to coming from games built around parity but allows the characters to fight more like their comic counterparts. There's a huge selection to choose from, so whatever your tastes are, you should be able to find a favorite.

The main objective complaint I have is that combat can seem disconnected at times. When you beat on someone, they don’t really react in rhythm to your attacks. They just sort of stay stuck in a static stun animation and then fall. It can make hits feel less impactful, even with the exaggerated effects and knockback distances. Some of the grapples have a similar issue. This is partially due to the limited animation available and a stylistic choice, but I still feel like some tweaking would help. The story is also lacking. One day Hydra attacks and that’s pretty much it. The Avengers then go on a rampage until there’s nobody left... because reasons? At this point the story might as well be “One day Steve was out for a walk, saw Avengers Suck on a wall and it was on!” The usual response is story doesn’t matter – but considering both the source material and attention paid to individual characters, it very much does.

Any other issues are subjective. I think the boss music is a very odd choice. It lacks any sort of drama or epic battle flavor. Some of the move selections are also questionable. As an example, Hawkeye’s Ultimate Avenger power is an explosive arrow. There’s nothing special about that at all because it’s no different than any of his other trick arrows. I think something like firing a barrage upward that rains down on all enemies or moving off screen and taking a single devastating shot from first person perspective would suit better, but again these are subjective and don’t hurt the game’s quality. Finally, there are a lot of small grammatical errors here and there from the translation, but not enough to harm the experience.

Top notch offering overall. I’m looking forward to future updates and other games from the creator.
Upvote 3 Downvote
This game is one of the best OpenBOR games I have ever played, and was my main inspiration to start in the OpenBOR world.

By playing the game you can see how much work, dedication and passion was put in this project. I strongly recommend you try this masterpiece.
Upvote 4 Downvote
Read more…
Top Bottom